The instructions that couldn’t be followed. 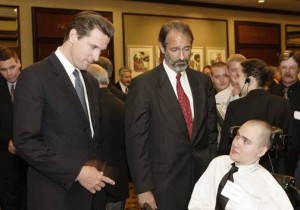 Brandon has met more than a few admirers over the years. Here, he and attorney Richard Ruggieri talk with then SF mayor, now Calif Lt. Gov. Gavin Newsom (who is now running for governor) at 2005 event honoring Brandon (photo courtesy Greg Habiby).

I’m grateful for all of these.

Thanks so much Martha Seuss: “I could not put this book down! This is an amazing story of perseverance. It leads you down a series of paths through the court system, depositions, and the heart wrenching true tale of Brandon Maxfield’s story of being on the wrong end of a defective Saturday Night Special. It was intriguing, emotional, and educational. I loved it!”

About to attempt some tweaks and changes to the site, bring it up-to-date, so it at least matches the Facebook page — Facebook.com/movetofire

They’ll be several additions here over the next couple of days, including more book excerpts and news.

In the days leading up to the auction, Brandon’s case received amazing publicity: 11 countries, over 300 news reports and articles. 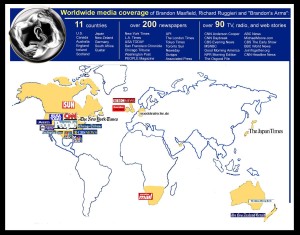